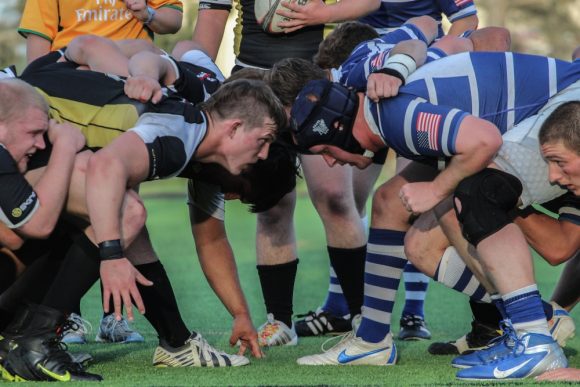 The CU and Airforce rugby teams engaged in a scrum on April 15, 2014. CU lost its season finale. (Matt Sisneros/CU Independent)

For their fourth game of the season on Friday, September 31, the University of Colorado men’s rugby team lost 41-5 against the No. 4-ranked BYU Cougars. Colorado remains 3-1 with a significant point margin in their favor.

The Colorado rugby team has been very successful recently. In 2020, the team was ranked in the top 20. Last year, they reached the conference semifinals, before losing to BYU. Through the first three games of the 2022 season, Colorado proved to be a standout team, combining for a total score of 171-8. Eighty of those points came from a shutout win against the University of Wyoming last week, with the rest coming from earlier wins against Kansas and Utah State.

During the entire eighty-minute game, Colorado only entered BYU’s goal area once, resulting in the lousy score of five.. In rugby, a team gets five points when they get the ball into the other team’s goal area, which is called a try, comparable to the end zone in football. After a team scores those five points, they have the opportunity to make a two-point conversion, similar to an extra point kick, albeit taken from an angle.

As their previous success this season shows, Colorado has a quality rugby team, but it was no match for the fast and strong BYU team. In the first half, BYU kept control of the ball most of the time, scoring five times along the way, including one from an out-of-bounds pass. Colorado left wing Kyle Scott made some big runs early on, but BYU squashed those chances and took the ball from him on multiple occasions. BYU kept the ball on Colorado’s side of the field for most of the first half, giving the team little opportunity to gain an advantage. BYU dominated Colorado on both sides of the ball, leading 31-0 at the half.

In the second half, however, Colorado’s sideline gained a surge of energy, constantly cheering and motivating their teammates. Colorado kept possession for the first fourteen minutes of the second half. With many slow and short runs, they managed to cross the goal line to score their only touchdown of the night. Colorado played much better defense as the game went on, limiting BYU to just ten points with much less time on possession.

However, although Colorado stepped up and matched the level of the competition in the second half, BYU had already built up too much of a lead to even the game. Thus, despite three landslide wins to start the year, the Colorado men’s rugby team proved no match for the top-ranked BYU Cougars, resulting in CU’s first loss of the season.

Colorado will be looking to bounce back for their next home game on Saturday, October 8 against Grand Canyon University.