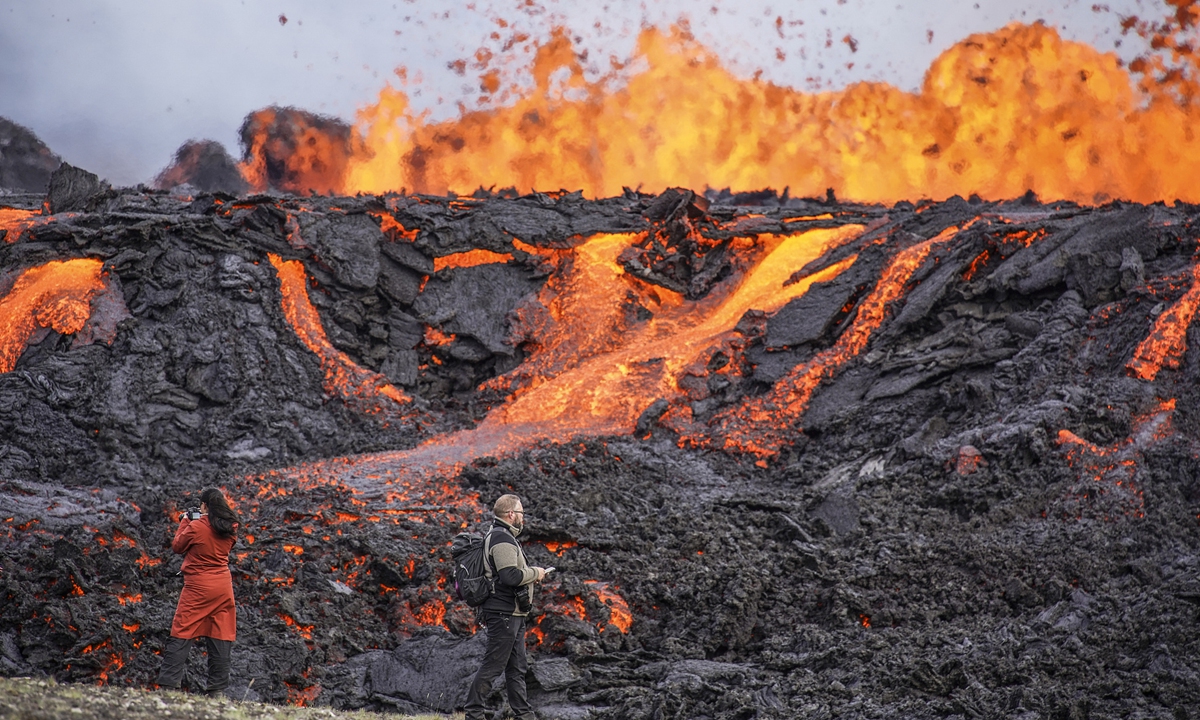 Lava flows from the Fagradalsfjall volcano in Iceland on August 3, 2022. Photo: VCG

A volcano erupted in Iceland near the capital Reykjavik on Wednesday, spewing hot lava and plumes of smoke from a fissure in an uninhabited valley after several days of intense seismic activity.

The eruption happened about 40 kilometers from Reykjavik, near the site of Mount Fagradalsfjall volcano in southwest Iceland which erupted for six months in March-September 2021, mesmerizing tourists and onlookers who flocked to the scene.

On Wednesday, a band of glowing lava could be seen erupting from the ground, shooting 20 to 30 meters into the air before spreading into a blanket of smoking black rock.

As it cooled, bluish smoke rose from the hilly landscape of the Reykjanes Peninsula.

About 100 onlookers quickly rushed to the scene, spellbound by the sight of bubbling lava and the intense roar that rose from the ground as the lava erupted, an AFP reporter at the scene said. .

The Icelandic Meteorological Office (IMO), which monitors seismic activity, estimated the size of the crack at around 300 meters.

He said the eruption began in the Meradalir Valley, less than a kilometer from the site of last year’s eruption.

Wednesday’s eruption came after a period of intense seismic activity, with around 10,000 earthquakes detected since Saturday, including two with magnitudes of at least 5.0.

Although there was no ash plume, the IMO said it was “possible that the pollution could be detected due to the release of gas”.

Gases from a volcanic eruption – particularly sulfur dioxide – can be high in the immediate vicinity and can pose a health hazard and even be fatal.

Gaseous pollution can also be carried by the wind.

“The risk to populated areas and critical infrastructure is considered very low and there have been no disruptions to flights,” the Icelandic Foreign Ministry said on Twitter.

Last year’s eruption saw more than 140 million cubic meters of magma pour into the area over a six-month period before it was officially declared over after nine months, in December 2021.

Relatively easy to access, the site has become a major tourist attraction, attracting more than 430,000 visitors, according to the latest figures from the Icelandic tourist board.

Wednesday’s eruption would be five to 10 times larger than last year’s eruption, with around 20 to 50 cubic meters of magma spewing out per second, Magnus Tuma Gudmundsson, a geophysics professor at the Institute, told Icelandic media. University of Iceland.

On Wednesday, rescue teams and police rushed to the scene to assess the danger and possible gas contamination, and discouraged people from visiting.

Mount Fagradalsfjall belongs to the Krysuvik volcanic system on the Reykjanes peninsula in southwestern Iceland.

Known as the land of fire and ice, Iceland has 32 volcanic systems currently considered active, the highest number in Europe.

The country experiences an eruption every five years on average.

And Wednesday’s eruption was the country’s seventh in the past 21 years.

However, until last year, the Reykjanes peninsula had not seen an eruption since the 13th century, when a volcano erupted for 30 years from 1210 to 1240.

Geophysicists said the 2021 eruption could signal the start of a new period of eruptions lasting centuries.

A vast island near the Arctic Circle, Iceland straddles the Mid-Atlantic Ridge, a cleft in the ocean floor separating the Eurasian and North American tectonic plates.

The movement of these plates is partly responsible for the intense volcanic activity in Iceland. 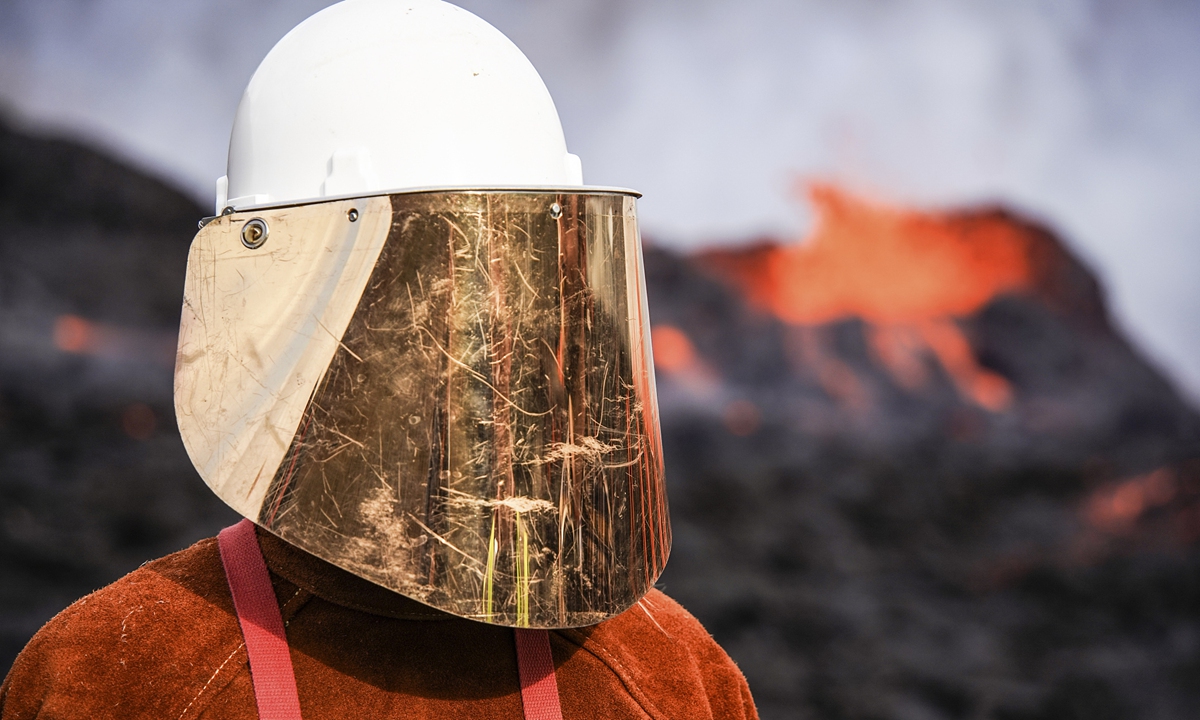 A person in protective gear stands near lava flowing from the Fagradalsfjall volcano in Iceland on August 3, 2022. Photo: VCG