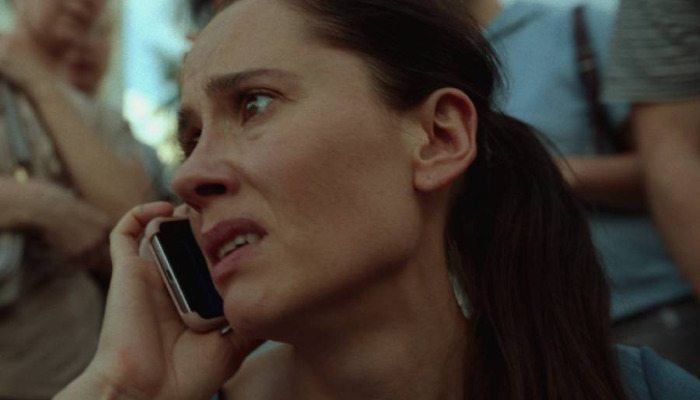 Yak Tam Katya? (How is Katie?) is an incredibly acted but emotionally devastating film. It is a film that comes from Ukraine and draws attention for its heartbreaking but powerful portrayal of a woman who works very hard to achieve happiness and loses everything little by little. It is one of the biggest movies of the year and will deeply affect viewers as it gradually reveals plot threads until we see the central character’s life unravel before our eyes.

Anna is the central character of the film. She is played with extreme sensitivity by a wonderful actress named Anastasiya Karpenko in a performance that will rip your heart out. Anna is a middle-aged single mother living in Kyiv with a young daughter named Katia (played well by Kateryna Kozlova). Anna takes care of her mother and usually her sister helps her. Although Anna is a paramedic, she struggles to make ends meet and is paying for an apartment that is adequate, but Anna dreams of more for her daughter.

The opening scenes of the film establish the bond between Anna and Katia and they do it remarkably well. Their bond is unbreakable and their love for each other is evident in the first sequences of the image. Soon, one seemingly calm morning, Anna walks Katia to school, but Anna lets her go alone after nearly taking her there. Katia is hit by a car driven by a careless driver, putting her in critical condition. As the bills start to pile up, the situation becomes more dire, and eventually tragedy strikes.

Anna seeks the help of a key male character in the film whose role I will not reveal. This man has already established another family and tries to deal with Anna’s request for help, but it seems that his needs are being listened to on deaf ears. Then there is the question of whether or not Anna will hold the person whose car hit Katia accountable. Can she even she do that? Does she have the power? There are a lot of complexities that the movie deals with, from how Anna must try to move on with her life after the horrible turn of events, and also how she now sees her life without Katia in it.

Director Christina Tynkevych has created an intense and thought-provoking drama here. It features themes that have a lot of thematic substance which makes the film unforgettable. Towards the end, when Anna must deal with the death of a person she might have had the power to save, Karpenko captures the intensity and pain of her character so perfectly that the actress will bring the audience to tears.

Yak Tam Katya? it is an unforgettable but also solemn film that does not sugarcoat the harsh realities it presents to the audience. Watching Anna as she tries to figure out a way to make it all make sense to her when it doesn’t make any sense at all is heartbreaking. Karpenko never strikes a false note here and every scene he finds himself in is raw and authentic. The supporting cast is excellent in his roles (Viktor Zhdanov, in particular, makes the most of his small role as a key doctor), though this is ultimately Karpenko’s film through and through. She makes her character relatable and her passion and desperation are vividly real and perfectly conveyed on screen.

While this movie is great, keep in mind that it deals with issues that are very depressing in nature but need to be addressed in the world. Tragedy strikes people hanging by such a thin thread and their entire life can be ripped right out from under them in a heartbeat. This film offers a glimmer of hope at the end by suggesting coping mechanisms for dealing with an unthinkable tragedy. The events this film portrays are uniquely intriguing and the film is a compelling picture that I highly recommend.