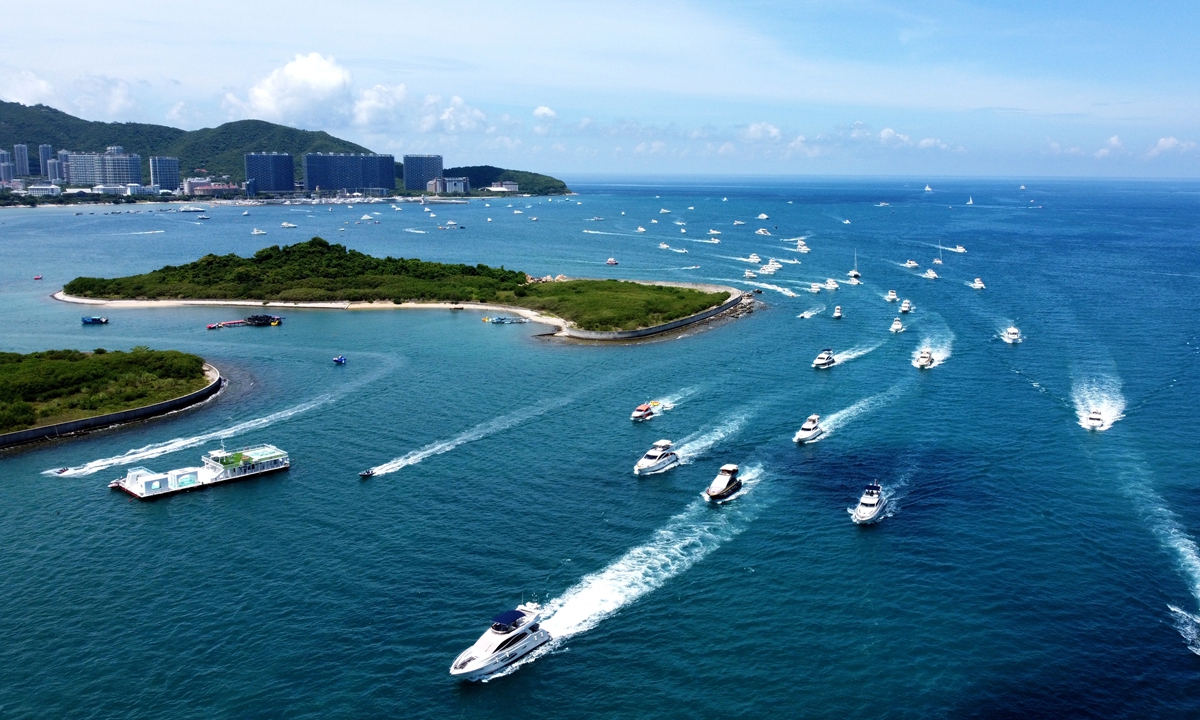 The yachts return to their home port after sightseeing and entertainment near Sanya in southern China’s Hainan province. Photo: cnsphoto

Chinese cities such as Sanya, “Hawaii of China”, and Yiwu, the world’s small commodity capital, have seen an increase in the number of COVID-19 infections in recent days, with tourism affected in the short term. But experts noted that the risk of large-scale transmission is relatively low, due to the prompt and strict epidemic prevention and control measures taken by local authorities.

The cluster outbreak in Sanya has spread in the province, and the virus strain is Omicron BA5.1.3 variant, which was first reported nationwide with hidden and strong transmission, Li Wenxiu, deputy director from the Hainan Provincial Health Commission, said at Friday’s press conference.

The source of the infection is still unclear, but it is likely that it was imported through trade with overseas fish sellers, Li said. It is also possible that the infection in the fishing port was caused by frozen fish products from overseas, according to Li.

A local resident named Zhang in Yiwu said life there was relatively “stable and orderly despite a surge”. Surrounding supermarkets, markets and other businesses in low-risk regions are still operating under epidemic prevention measures.

The local government will send daily supplies to residents who are under closed-loop management, according to Zhang.

Hainan quickly took strict epidemic control measures, so the risk of large-scale transmission is relatively “low”, a Beijing-based expert said on condition of anonymity. People still need to be alert to the epidemic situation as the number of infections continues to rise, the expert said.

Most domestic tourism has been hit hard by the outbreak, but some industry employees are still showing confidence as they believe the impact is short-term.

In the second quarter, average daily arrivals at Sanya Airport decreased by 74.8% year-on-year. But in June alone, Sanya received 1.19 million overnight domestic visits, up 93.17 percent from May, according to the Sanya Tourism Promotion Board.

An employee of the tourist area of ​​Sanya Xiaodongtian told the Global Times on Friday that the tourist attraction was suspended on Tuesday after a confirmed case was detected on Monday, and that employees should stay at home.

The outbreak had an ‘impact on the tourism industry’ as the city faced a surge in April, and began to pick up during the summer holidays as the outbreak across the country began to subside in July. “But we still have confidence because the local government has taken timely epidemic prevention measures,” the employee said.

See also  Serial killer who said he killed to ward off earthquakes dies between 75 and 95.5 WSB

A few staff members started working in the tourist area under closed-loop management from Tuesday and the tourist attraction has been suspended, an employee surnamed Zhang from the Nanshan Cultural Tourism Zone of Beijing told the Global Times on Friday. Sanya.

Another employee surnamed Gao from a golf club in Sanya’s low-risk Yalong Bay area told the Global Times on Friday that a negative 24-hour nucleic acid test result was required for entry. Many reservations have been canceled due to the latest outbreak, Gao said. Gao and other employees work in a closed loop.

A tourist who arrived in Sanya and stayed at a low-risk hotel in Haitang Bay on Wednesday told the Global Times on Friday that she felt hotel life was relatively normal. But surrounding restaurants were closed, she said.